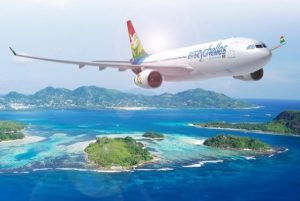 How important has the Etihad investment been to the airline?
In 2012, Etihad took a 40% stake in Air Seychelles. We took that opportunity to re-size and re-shape the airline and review every aspect of operations, including the fleet and network.

Every year since has been profitable. We grew 20% in 2016 and we expect to grow 30-35% in 2017. Both the long-haul and regional network will be expanded. Ten aircraft are now under an Air Seychelles registration. Of the six Twin Otters, the oldest is six years’ old. And our second Airbus A330 has just been delivered.The Etihad investment stabilized the airline and has put the business on a solid platform.

Is Etihad involved in the day-to-day running of the airline?
No, the Air Seychelles management is entirely accountable for the airline. Remember, the Seychelles Government still owns 60% of the airline and the majority of the board are Seychellois.The real advantage of the Etihad investment is the synergies it makes available.

This cross-fertilization of knowledge and skillsets has definitely helped Air Seychelles
We simply wouldn’t be able to get the same value for money as a smaller airline. But just because our purchasing power is increased it doesn’t mean we have to buy something we don’t need. Air Seychelles can opt in or opt out of any purchasing agreements.We also get access to Etihad’s state-of-the-art training facilities. The airline recently recruited 55 new crew members for our A330 and they were all sent to Abu Dhabi to train. And, of course, the extended network that partner airlines provide is vital. Access to connectivity improves revenue. Our systems have been upgraded to take full advantage of this. Customers don’t want to have to pick up their bags at a connecting airport or queue to get another boarding pass.

Is consolidation in whatever form the only way for smaller carriers to survive?
You have to know your airline and its scope. Our focus has been on growing our frequencies and getting the most out of our assets. Our aircraft are worked very hard.

We increased our Johannesburg service from three to five times a week and did the same for Mauritius and Mumbai. We did all that with our existing fleet. But we were maxed out and that is why we decided to take a second A330. We needed to push on and the Etihad involvement made that easier.Because we have a small fleet, that A330 gives us a tremendous increase in available seat kilometres and that provides the basis for the 30-35% growth this year.

You’re increasing your exposure to Europe at a time of geopolitical uncertainty. Does that concern you?
It doesn’t worry me. We have just launched a twice weekly service to Dusseldorf and we serve Paris four times a week. That’s six direct flights—it isn’t a great exposure. You always need to work hard to make routes work though, and you need to market the airline properly.

Also, working the European market provides additional opportunities for our regional and domestic services. An A330 can now fly some of the Johannesburg and Mumbai services and that frees up an A320 to add Durban to our regional network. It is a sensible, well-managed approach. I don’t like spikes and dips and this strategy will bring steady growth.

Can you balance your numerous corporate social responsibility programs with running a profitable, efficient airline?
My time is split between the commercial and people aspects of the airline. Air Seychelles is a significant employer and a well-known brand name. Many Seychellois either work for, or know someone who works for, the airline. We are truly embedded in the fabric of the nation. As the CEO, I have to understand that and the effect my decisions can have on local communities.We do what is right for the airline but we are determined to bring the local communities along on our journey.

How important is the airline to the local economy?
Tourism is the lifeblood of the country. We work closely with the tourism board and with hoteliers. Praslin is the second biggest island in the archipelago and to get there from the main island, Mahé, requires either a ferry ride that takes over an hour or a 15-minute flight.

Are you confident that tourism can keep growing or does protectionist rhetoric worry you?
There isn’t much tourism from the United States so the situation there isn’t critical to us. And our main markets in Europe—Germany, the United Kingdom, France, and Italy—are all growing year-on-year although there was a slight dip in the French market in Q1 this year.

So, while growth is obviously good, the country will not be put at risk. Air Seychelles buys into that. We want to be commercially successful but it is planned growth. Our business isn’t being developed on a wing and a prayer.

Can you attract enough staff to keep the airline growing?
When we advertised for cabin crew recently we got hundreds of applicants. It was up to us to ensure we got the selection process right. And, as mentioned, the successful candidates got world-class training at a world-class facility in Abu Dhabi.

As for pilots, over 70% are Seychellois. That’s down to having a clear career path for them from the Twin Otters to the A330 and every opportunity for progression. It would be a higher percentage of local pilots but we recently recruited a few ex-pats for the new A330.And our engineers have all spent time training and working with Etihad.

When we bring them back, they have great experience under their belt. It’s the same for graduates in all core functions. There is a two-year program that trains them and provides them with work experience with partner airlines. When they come back to us, they are fully prepared for the tasks we need them to accomplish.It’s not magic. It doesn’t happen overnight. But it does work.

Is the voice of smaller airlines being heard by the industry?
Actually, I don’t see any bias against smaller airlines. Air Seychelles is as complex as any airline.We have three units; long-haul, regional, and domestic services. These units are intertwined and to do our job properly, we always have to consider all three units.

If you could change anything in the industry, what would it be and why?
There are challenges within airlines’ remit and it is up to us to deal with those. But two major challenges that fall at least partially outside of our control are infrastructure on the ground and infrastructure in the sky. Airports must react to growing traffic in the right way. Take security. It must be fast and efficient as well as robust if aviation is to keep running to its potential. This is a shared responsibility but airlines need airports and governments to play their part.In the air, we simply need more capacity. Air corridors are becoming saturated. The industry has to move beyond the funnel effect.