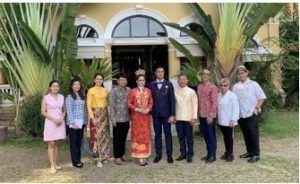 Bangkok (Thailand) – May 9, 2019 (travelindex.com) – Blue Elephant Cooking School and Restaurant in Phuket was recently the venue for a press conference to announce the upcoming, two-day Peranakan inspired “The 9th Phuket Baba Wedding” package which will take the lucky couple to various prominent locations in Phuket between 14-15 June 2019.   The Thai-Chinese Peranakan community is predominantly of Hokkien ancestry and has long held on to its unique culture and traditions for over 100 years, remaining a stronghold in the Phuket community.  “The 9th Phuket Baba Wedding” offerings which include amongst others accommodation, photoshoot and a bridal luncheon party at the Blue Elephant Restaurant costs @Baht 49,900 per couple.