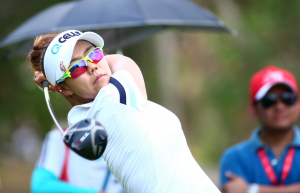 Pattaya (Thailand) – February 22, 2019 (travelindex.com) – South Korean Jenny Shin snatched the lead with a birdie on the last hole during an exciting second round of the Honda LPGA Thailand 2019 ladies golf tournament at the Siam Country Club Pattaya Old Course in Chonburi province on Friday.

The 67th-ranked South Korean had five birdies and one bogey in her round of 68 on Friday to lead the field by one stroke at 11-under par. Three players were tied in second place on 10-under – American Lizette Salas, Australian Minjee Lee and Eun-Hee Ji of South Korea.

Shin said she was feeling the heat and thought she could have played better: “I wasn’t hydrated enough this morning and I could feel it by late afternoon. I thought I could have made a few more putts. I will try to make sure I’m hydrated more tomorrow.”

Salas, 29, said she was happy to be tied in second place and added that she had spent a lot of time in the gym during the off season. “I’m not a rookie anymore, I’m a vet, so it’s time to get serious. I’ve found I can more aggressive with the driving game and things are starting to pay off,” she said.

Thailand’s two superstar women’s golfers, the Jutanugarn sisters, had very different rounds on Friday. The 18th-ranked Moriya came out firing in her second round, carding three birdies in a row on the 6th, 7th and 8th holes, followed by birdies on the 11th, 17th and 18th. However, she stumbled with a bogey on the 9th to finish her first nine with a two-under 34. She shared 9th place on the leaderboard with seven others at the end of the day.

The 13th proved to be an unlucky hole for her and she had a bogey, the only blemish in the second half of her round.

After finishing her round, Moriya said she’d been making adjustments to her swing, but was happy with her play in general. “I’ve been working with a coach for a while, but it’s just something I’ve been working on and it’s not that easy. I’m really close to getting there, but sometimes it’s going to be a bit off. I just have to be patient.”

She said the subtle changes to her game were taking time but improving her play. “I’m just trying to play it one shot at a time and just keep moving. I mean, everybody can hit a bad shot, but when I hit a bad shot I just close the door and try to move forward.”

When asked if she wanted to take over her younger sister Ariya’s ranking as world number one, Moriya laughed and said she’d be lying if she said she didn’t. “Well, if I said no it’d mean I lied. Of course I want to do my best, but I don’t really focus on what position I want to be, I just focus on what I am on the golf course and do my best.”

Moriya added that it was great to be playing in Thailand. “I have played so many times on this golf course it feels like growing up here, even though now I only play here once a year in this tournament. I always feel a really warm welcome here.”

Younger sister Ariya, the No.1 women’s player in the world, started well with a birdie on the 1st, but had a bogey on the 5th and an uncharacteristic double bogey on the 6th. She finished her first nine with a four-over 40.

The top ranked lady player bounced back on her second nine holes with four birdies and no bogies to end the day with a 72 and tied in 19th place. “It was not a very good front nine, but on the back nine I came back pretty good. I’m confident for tomorrow, but I still have a lot of things to work on,” Ariya said after finishing her round. “I need to be more committed.”

Ariya admitted she had not been happy with her game in her past few tournaments. “I got worried and scared after I made a bogey, and then a double bogey, so it was pretty tough for me. I’m nervous and worried because I’ve not played well in the last few tournaments.

The sisters are well placed and within striking distance of the heavily congested field above them going into the third round.

Pannarat Thanapolboonyaras had the third best finish of the eight Thai players in the field and ended her second round tied in 39th place with a one-under par. Pornanong Phatlum was one shot back with an even-par score, followed by amateur Attaya Thitikul on one over.

Also on one over in a tie for 48th place was Thai Thidapa Suwannapura.

Seventy of the best women’s players in the world are battling for total prizemoney of US$1.6 million, with the winner receiving $240,000.