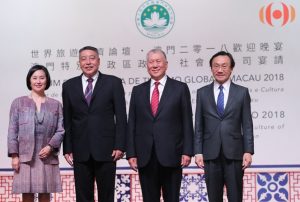 Macau (Macao SAR) – October 24, 2018 (travelindex.com) – The seventh edition of Global Tourism Economy Forum (GTEF or the Forum) was unveiled today (23 October). A grand welcome dinner was hosted by the Macao Special Administrative Region Government at Wynn Palace tonight to welcome delegates from near and afar, and convey the best wishes to the Forum for a great success to inspire closer tourism cooperation across the globe with innovative insights.

Secretary for Social Affairs and Culture of the Macao SAR Government and Executive Chairman of GTEF, Alexis Tam, highlighted in his welcome remarks, “Arriving at our seventh edition, GTEF is still a young but vigorous aspirer setting eyes on the horizon ahead. With a different designated theme each year, we have been engaging in fruitful exchanges to steer the global tourism economy towards a sustainable future. 2018 is celebrated as the EU-China Tourism Year. It is also a pivotal year for our nation to map out the development plan for the Guangdong-Hong Kong-Macao Greater Bay Area.”

He continued, “With the guidance and support of the Chinese Central Government, the Macao Special Administrative Region stands strong to become a world centre for tourism and leisure, uniquely connecting the world as a bridge between the east and west. Last year, Macao successfully joined the UNESCO Creative Cities Network in the field of gastronomy. Together with our UNESCO-inscribed Historic Centre of Macao, we want to show the world that our city’s portfolio mirrors not only a rich trove of cultural heritage, but also an innovative and creative future. We strive to contribute as one of China’s windows for fostering international collaboration and concerted development with multilateral success.”

At the dinner, souvenirs were presented to representatives of the European Union (EU) as GTEF 2018 Partner Region and Guangdong Province as GTEF 2018 Featured Partner Chinese Province, as well as GTEF’s collaborative partner, supporting units and sponsors in token of appreciation for their support. International and local guests took the opportunity to connect and build friendships with each other during the dinner.

As a high-level exchange platform hosted by the Secretariat for Social Affairs and Culture of the Macao SAR Government, the 7th edition of Global Tourism Economy Forum unfolds a series of thought-provoking discussions and panel sessions under the theme “Strategic Partnership in a New Era, Rising Momentum for a Shared Future”. The Forum will continue tomorrow (24 October) with its Day 2 program, including two Special Keynotes on “Tourism Development in Greater Bay Area” and “Building a Travel Ecosystem and a New Lifestyle”; several discussion panels themed as “Greater Bay Area Session Part I – China Enterprises Perspective” in cooperation with All-China Federation of Industry and Commerce (ACFIC); “Greater Bay Area Session Part II – Macao Perspective” in cooperation with The Macau Chinese Enterprise Association; and “Technology – The Virtual Bridge” in cooperation with Pacific Asia Travel Association (PATA).

About Global Tourism Economy Forum
The Global Tourism Economy Forum (GTEF) is hosted by the Secretariat for Social Affairs and Culture of the Macao SAR Government, in collaboration with World Tourism Organization (UNWTO), co-organized by the China Chamber of Tourism under the authorization of All-China Federation of Industry and Commerce (ACFIC) and coordinated by Global Tourism Economy Research Centre (GTERC). GTEF’s supporting units include the Ministry of Culture and Tourism of the People’s Republic of China, All-China Federation of Industry and Commerce (ACFIC), the Liaison Office of the Central People’s Government in the Macao SAR, Office of the Commissioner of the Ministry of Foreign Affairs of the People’s Republic of China in the Macao SAR, Macao Government Tourism Office (MGTO), World Travel and Tourism Council (WTTC), Pacific Asia Travel Association (PATA), World Tourism Cities Federation (WTCF) and European Travel Commission (ETC).

Since its inception in 2012, GTEF has successfully established itself as an influential high-level cooperation platform to promote sustainable development in the global tourism industry with a focus on China. To date, GTEF had received more than 8,000 participants from 83 countries and regions, including delegations from 106 provinces and cities of Mainland China; and 437 internationally renowned speakers.